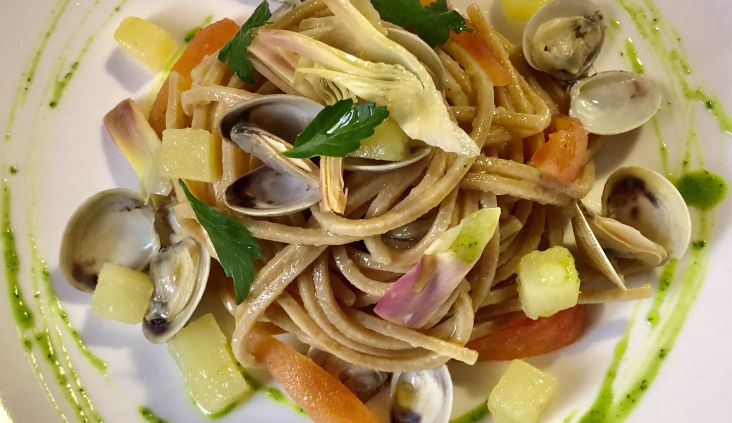 La Caravella at home: pasta with Lupini clams and artichokes

A spring recipe with the typical clams of the Venetian lagoon

We present a simple and delicious recipe, in collaboration with our Chef Alfonso Cicerale: Wholemeal spaghetti with lupini (lagoon clams), artichokes, potatoes and parsley dressing. It is a delicate and tasty dish, which you can also replicate at home. Are you curious? Find out more here

Lupini: clams from the Venetian lagoon

Lupini, or in Venetian "bevarasse" or "bibarasse", are typical clams of the Venetian lagoon of medium size and rich in taste, which can be found not far from the coast, in sandy and shallow bottoms and can be picked up also with bare hands. In fact, during the summer season you can see, especially from the vaporetto that shuttles between the Lido di Venezia and Punta Sabbioni (but each one has his/her favorite place), the Venetians crouched in the shallow waters in search of these tasty clams to be used in various recipes.

Recipe: wholemeal spaghetti with lupini from the lagoon, artichokes, potatoes and parsley dressing

Drop the parsley and wash it for 30 seconds in boiling water, then drain, and immediately cool in cold water with a little ice. Finally, blend the dried parsley with the boiled potato pulp, the extra virgin olive oil, 1 ice cube, a little salt and the mustard.

Put the Lupini (clams) in a large bowl with a little cold water and half a handful of coarse salt to drain for at least one hour.

Then in a medium saucepan, brown a clove of garlic and parsley stalks, then add the purged and beaten clams (procedure that sees the lupini beaten one by one without so much pressure to make sure there are no clams with sand), cook with half a glass of water and lid. As soon as they begin to open, turn off and let them rest, then shell them, leaving a small part with the shell (as a decoration) and filter the cooking water.

In the meantime carefully peel the artichokes, then slice them finely and sauté them with a clove of unpeeled garlic, a few drops of lemon and white wine, until cooked, season with salt and pepper, then remove the garlic.

Cook the spaghetti in boiling salted water, in the meantime brown the chopped shallot in a nice drizzle of extra virgin olive oil, then add the lupini (pulp and cooking water) the potatoes previously boiled and cut into small cubes, the sautéed artichokes and let the sauce tie (the potatoes will give a lot of creaminess) Then drain the spaghetti al dente, toss with the obtained sauce, season with a drizzle of extra virgin olive oil, salt and pepper.

Serve by placing some lupini in their shells on top, and season with the parsley dressing to give the recipe a chromatic touch as well as a fresh taste.